Two decades ago, the news reports out of Rwanda were sobering. Over a 100-day period in the spring of 1994, ten percent of the country’s population was lost to a genocidal mass slaughter. Up to one million people were dead; it was a reality the world had trouble understanding.

When David Helmer, a member of the VisionTech Partners Advisory Board and founder of Helmer Scientific, invited me on an entrepreneurial visit to Rwanda in November, I felt some trepidation. Why Rwanda? Why now? Knowing David had successfully started a company there and was optimistic about the country’s future, I agreed to accompany him.

No businessperson likes walking into a deal blind, so I did do some due diligence. Here’s what I learned. Rwanda has reinvented itself into a new model of what African nations can be. It is now part of the East African Community (EAC), a progressive regional intergovernmental organization that includes Rwanda, Burundi, Kenya, Tanzania, and Uganda. These nations came together to form a regional economic bloc with strategic and geopolitical significance. In 2014, the EAC boasted a combined population of more than 143.5 million people, a combined Gross Domestic Product of $110.3 billion, and a total land area of 1.82 million square kilometers. Rwanda is also home to one of the world’s largest populations of mountain gorillas—more about that later.

David and I flew into Kigali, Rwanda’s capital and home to more than a million people. As we drove to our hotel, I was struck by how clean the city was, even the lower income areas. There was no trash; everything was orderly. New construction was everywhere. Our hotel was as nice as any in a large American city. My plans for the trip included consulting with government and business leaders on entrepreneurship, company formation and capital raising—the very things I do through VisionTech Partners and VisionTech Angels with Indiana startup companies. But with a full week in Rwanda, I was surprised to learn that David and I had no formal agenda. When I expressed my surprise, he gave me a knowing look.

I soon understood the significance of that look. Rwandans are very personable and open to new people and new ideas, particularly when it’s related to business. For our first day there we had a breakfast meeting scheduled and that was it. By the end of the meal, four meetings had been set up. Our day, once empty, was full. Frankly, that’s how the rest of the trip went. We’d meet with people and from there new meetings and connections would mushroom. Everyone was welcoming, gracious, and eager to share their ideas and pick our brains.

One of the things we learned is that Rwanda is home to an EAC Center of Excellence in Biomedical Technology. They are building a technology park that will focus on life sciences, informatics and energy. Naturally, this led to more conversation and to make a long story short, I’ll be heading back to Rwanda in February with an initial proposal on how to leverage their new infrastructure into new collaborative opportunities. 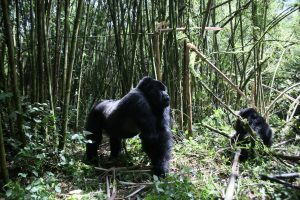 The week flew by, but as busy as the trip was, I made time to visit Volcanoes National Park for some gorilla trekking. It was quite amazing to see these animals up close and in their element.

It’s said perception is reality. This trip to Rwanda proved that adage isn’t always true. The reality of Rwanda is optimism and opportunity. I’m already looking forward to my next trip.