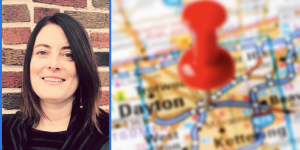 VisionTech Partners Executive Director Ben Pidgeon recently sat down with Kim Frazier, Director of Growth Initiatives for The Entrepreneurs Center, also known as TEC Dayton. Formerly an international economic development executive in Washington D.C., Kim returned to her home state of Ohio to work on regional economic development, which ultimately led to creating new opportunities for entrepreneurs. She is leading the effort to establish a new VisionTech Angels chapter in Dayton that will further expand opportunities for the regions’ angel investors and entrepreneurs. Here’s their conversation.

BP: Tell us about The Entrepreneurs Center.
KF: We are a technology accelerator and business incubator in Dayton, Ohio, that’s focused on helping entrepreneurs achieve their business dreams. The organization was founded as Tec Dayton in 2000 and was strictly an incubator. When Scott Koorndyk came on as president in 2014, the organization became more of a commercialization center. Scott and I had worked together in economic development in the past and he recruited me to TEC in 2016 to help build out our pathways to commercialization programming.

BP: You had a big win not long after you joined TEC.
KF: Yes, we did! In 2017, the Ohio Third Frontier Commission selected TEC as the Dayton Region’s Entrepreneurial Services Provider (ESP). This two-year award gave TEC and our collaborative partners about $6.1 million to support the growth and development of regional technology start-ups, including those originating from the Air Force Research Laboratory (AFRL). Thanks to the award, we can provide more early stage services to entrepreneurs. It really helps us fill a critical gap in the Dayton area ecosystem.

BP: Who are your partners in the ESP?
KF: Our lead partner is Wright State University, which has strong programs in business, engineering and medicine. Other collaborators include The University of Dayton, Wright Brothers Institute, The Dayton Area Chamber of Commerce, CreativeFuse, and Nucleus CoShare. All of these organizations have a stake in growing Dayton’s commercialization and business startup efforts.

BP: How did you learn about VisionTech Angels?
KF: One of our local angel investors, Andy Cothrel, knew VisionTech Partners Co-founder Oscar Moralez and introduced us. Oscar was very generous in sharing his expertise and explaining VisionTech’s investing model. I’m a skeptic, but Oscar impressed me.

BP: What makes VisionTech Angels attractive to TEC Dayton and its community of investors and entrepreneurs?
KF: I really like VisionTech Angels’ overall investing process, from identifying and screening investable companies, to pitch week and the thoroughness of the due diligence. I also like the low barriers of engagement. Angels can invest as little as $5,000 per deal. For startups, they don’t have to pay to pitch. Instead, they are selected on their merits. The other side of it is Dayton’s industry mix, which is primarily aerospace and manufacturing, is much like Indiana’s. VisionTech “gets” us so with the support of many people associated with TEC, we decided to pursue becoming a VisionTech Angel chapter.

BP: Dayton has a connection with VisionTech Angels. Explain.
KF: (Laughs) Yes, Spintech LLC , a Dayton area company, is a VisionTech Angels portfolio company. They are a perfect example of the powerful technology being developed in our region— they produce shape memory polymer technologies for composite manufacturing and structural repairs in aerospace, automotive, defense, and other markets—and solid leadership. Spintech CEO Patrick Hood and its president, Craig Jennings, are both serial entrepreneurs. Dayton has a wealth of technology talent like this. 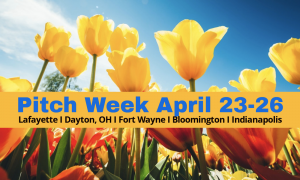 Avenue from 11 am-1 pm What’s the response been?
KF: We had a kick-off event in mid-February and more than 50 people came to learn about VisionTech Angels; it was great! So far, ten have RSVP’d for Pitch Week next week. Our local angels and entrepreneurs are very excited to have a VisionTech Angel chapter in Dayton. Our investors are excited to be part of a largely, very dynamic and informed angel investing group and entrepreneurs appreciate that they will have broader access to capital. I have gotten so many emails from people interested in what we’re doing. We’re really looking forward to next week!

To learn more about The Entrepreneurs Center, please visit their website.