Editor’s Note: VisionTech Partners is a co-sponsor of The Innovation Showcase on Thursday, July 9 at the Dallara IndyCar Factory in Speedway. Over the next two weeks, we are profiling some of the start-up companies who have the honor of pitching at the Showcase. 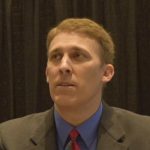 This is not Derek Cowburn’s first rodeo, but the seasoned entrepreneur admits his company LumenCache is in the midst of an incredible ride.

“I came up with the idea for our technology—a lighting and controls solution that uses renewable energy sources and intelligent automation—14 years ago,” explains Derek. “Even though the market wasn’t there at the time, I waited and eventually got a patent. Since Tesla introduced its PowerWall solar-powered battery in May, interest in our modular DC nanogrid has exploded.
“Timing is everything,” he adds.

Cowburn is one of nearly 20 start-up company CEOs set to present at The Innovation Showcase, Thursday, July 9 at the Dallara Indycar Factory. He founded Fishers-based LumenCache four years ago after a previous start-up company he was involved in struggled after the 2008 economic downturn.

The event taught Cowburn a number of valuable lessons, including the fact that failure is part of success. “Nothing succeeds like desperation. When I started LumenCache, my learning curve was seasoned; I was determined to be as efficient as possible in getting this new venture off the ground because I knew it would be a long haul.”

A half million dollars later, LumenCache has a firm foundation and strong interest from industry giants like Intel and Forest City Enterprises, a Cleveland-based real estate development company with plans to build 14,000 apartment units over the next two years. Forest City is eager to include Cowburn’s nanogrids, which support energy efficient LED lighting and an Internet of Things backbone, in its new construction.

While the stars are aligning for Cowburn, he admits wishing he had done one thing differently: focus more on marketing instead of the technology to raise more money in the early days of LumenCache. As it is, he has emptied his 401(k) and turned to family members to invest. “My mother says she’d rather invest in me than Apple,” he says.

His goal for The Innovation Showcase  is to generate enough interest to raise the $1.5-$3 million needed to meet market demand and the opportunity for rapid growth.

“We are like a rocket on a pad. Now it’s time to launch.”